Cozumel! We were up early and had a yummy breakfast once again in Parrot Cay before heading over to Diversions to meet up with our tour group.  Today was the day we were scheduled to swim with the dolphins!!! After a quick check-in, we head out to grab taxis to go to Chankanaab Bay. It was a short 15-minute ride and then we arrived at the Mayan named park. 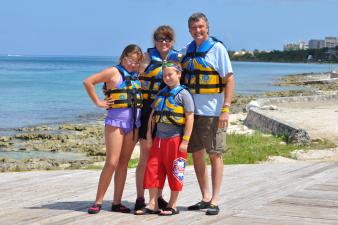 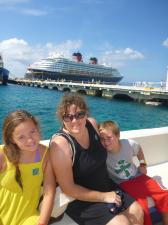 Since we had about half an hour before our dolphin program, we went over to watch the Sea Lion show. They were such smart animals and so very well trained. It was super hot and the nearby pool was calling William’s name so he and I snuck out to let him cool off.  We could still see and hear the sea lion show from the pool. A few minutes after we left, Alex got called up to be a part of the show. William and I popped out of the pool and watched sister hold the hula hoop jump with the sea lion.

Before we knew it, it was time to meet our trainer and our dolphin. Our group was made up of the four of us plus Jilly (one of the entertainment staff from the Wonder). Great small group! Our dolphin was an 8-year girl named Padme whose siblings were Luke and Leia. Notice a trend?   This made our sweet 8-year-old Star Wars fan ecstatic!

During our nearly hourlong encounter with our dolphin, Padme, we held her like a baby, kissed her, got kissed by her, did target practice with her, petted her but by far our favorite activities with Padme was when she pushed our feet with her nose while we held onto a boogie board and when we held on to her fins and rode her belly around the lagoon. We did have a very funny moment when it was William’s turn for the belly ride. He missed the fins and grabbed a hold of her belly and held on for all his might. Bless her, Padme was gentle and swam very slowly. The trainer yelled for William to grab a hold of her fins. So little man shimmied up her belly and grabbed the fins. She knew when it was right and as soon as she felt the correct hold, she took off across the lagoon. 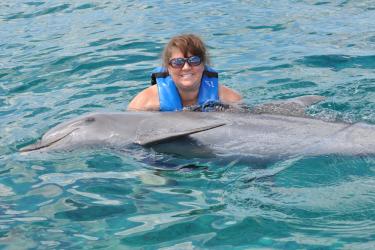 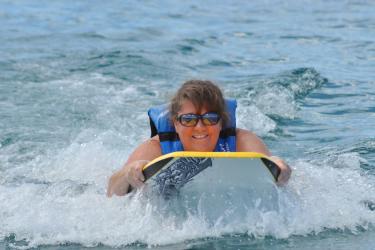 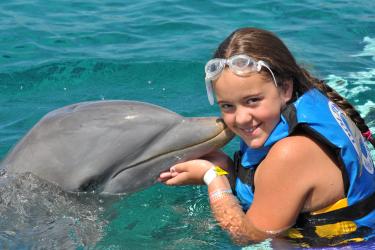 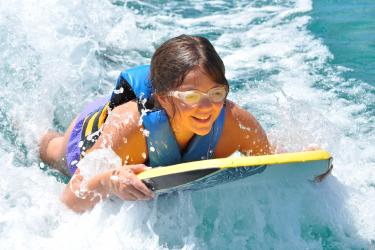 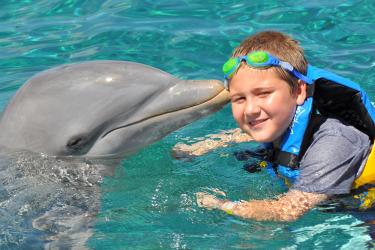 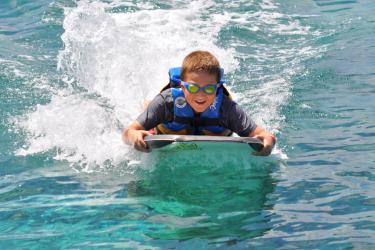 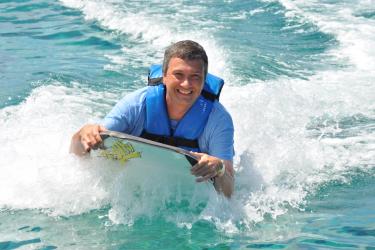 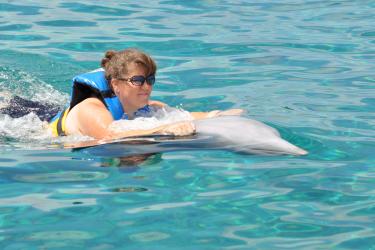 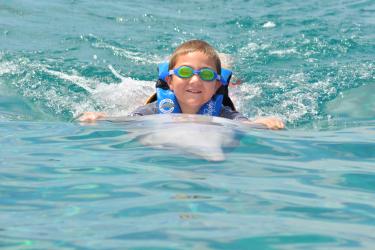 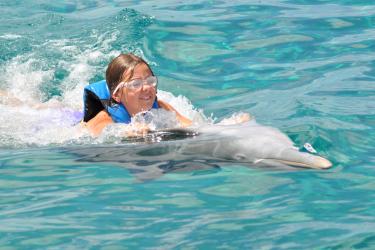 After we sadly said goodbye to Padme, our trainer took us around to see the baby dolphin that had been born 5 weeks earlier. She was precious and both of my kids wanted to climb in the water with her to play!

Next up, we were able to enjoy the rest of the park. Alex and William took out kayaks with a guide while Lance snorkeled and I enjoyed a cocktail on the beach. The sun was bright, the water was the most beautiful shade of blue I had ever seen and the palm trees were waving gently with the ocean breeze. Perfect day! When the kids finished on the kayaks, Lance went out for a turn. I took the kids over to enjoy a fantastic pool. Before we knew it, our time was over at the park. This is definitely a place I would come to again. It was a fabulous day in Cozumel. 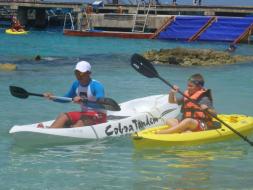 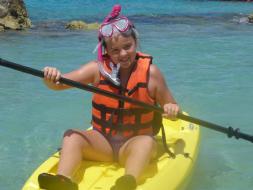 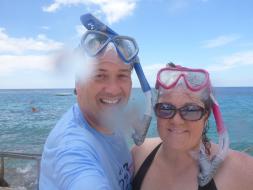 The excursion included a taxi ride back to the downtown area where the Wonder was docked. We were able to pick up a few souvenirs for the family as we made our way back to the ship. It was fun to be in a foreign country and look around to see friends from the ship.

After a day in the sun, we were exhausted. We went straight to the stateroom, ordered room service and by the time we all showered our food had arrived.  Talk about being spoiled!  After filling our bellies with some yummy food, it was time for our evening activities.  Tonight we were treated to a crew talent show.  Outside of the entertainers, there are some pretty talented crew members.  It was especially funny to see some of the crew members put themselves out there for some funny skits.  Our favorite was when Jimmy came out in a pink tutu! Afterward, we enjoyed dinner at Triton’s for the last time.

Surprise! The kids dashed off to the kids’ clubs and Lance and I finished the boat for the competition the next day.  It was a long night but we had a great time working together.  When the kids came home from their clubs, they helped as well.  It was a late night but we finished and we were proud of the final product!

(When we came home after dinner, there was a security guard sitting in a chair in the hallway.  I asked if everything was okay and she assured me it was. A little bit later, we heard loud music from next door. I went in the hallway to see if the security officer was still there and to see if she could hear it. She was and she could.  I pressed a bit with some questions.  She said the lady was drunk and acting crazy. There was an officer stationed outside her room for 12 hours. Glad to know they take the safety of their guests – even the ones who had too much to drink – seriously.)