Lance was up early and headed up to decks 9 and 10 to find a crew member painting the ship.  He wanted to borrow some paint for our boat building project.  Success!!!  He was gone for about two hours getting it painted.   When the appointed kid pick-up time arrived, I picked up two very happy (if not sleepy) children at the Oceaneer’s Lab.  They happily related their evening of fun: dancing at a dance party, listening to a bedtime story with Mickey and watching a movie with Goofy.

By the time we returned to the stateroom, Lance had returned with the painted boat.  It looked fantastic and it was painted with the actual paint used on the Wonder.  After working a bit on the decking on the boat, our family had a fairly lazy morning enjoying all the Wonder had to offer.  Up on Deck 10, the views were amazing and we enjoyed them even though the winds were heavy due to being in the midst of the trade winds.   It was a perfect day to enjoy being at sea!!

After lunch, we all headed to the Lobby Atrium for the long-awaited Pixar Party. One by one our favorite characters appeared and we had a chance to dance with them all!  The characters included Mike & Sully, Remy, Woody & Jessie, Russell & Dug and Mr. Incredible & Elastigirl.   The looks on my kids’ faces while they danced with the favorites brought a huge smile to my face.  Fabulous time! 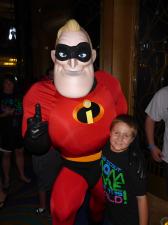 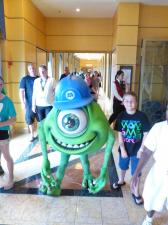 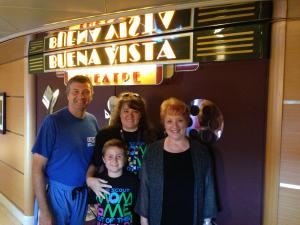 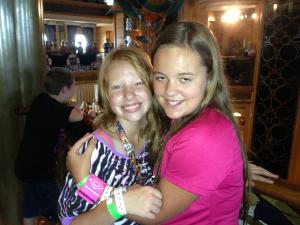 Following the Pixar Party, Alex went back to the Edge to join her friends for more fun. William hung out with Lance and me for the magic workshop with Magic Dave.  The magician was hilarious and taught William a ton of tricks. He spent the majority of the next few days practicing the tricks. Don’t be surprised if William wants to show off his new skills!

After dropping William off at the lab, Lance and I went back to the stateroom to work on the boat for a little bit until the big Disney show Dreams, the Captain’s Gala and the Officer’s Ball. I love seeing my sweet family all dressed up on nights like tonight. Handsome group and I am so glad they are mine!! 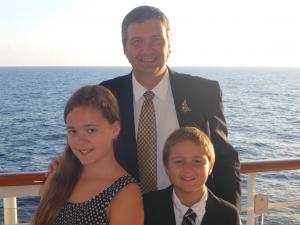 We first went to see the theatrical production of Dreams. It won the award for best show on a cruise line and I can definitely see why! Anne Marie and Peter Pan were the stars of the show but my personal favorite was the Blue Fairy. Disney commands the most talented performers!

After Dreams, the officer’s hosted the Officer’s Ball in the Lobby Atrium. It was fun to get to dance with Captain Thord and Alex loved her dance with Cruise Director Jimmy. William and his new friend AJ danced with quite a few of the female officers but his favorite dance was with Assistant Cruise Director Ashley – I think even over his dance with me. And surprisingly Lance danced quite a bit with both Alex and me. We all worked up quite an appetite dancing and were happy to head into Animator’s Palette for a yummy dinner yet again. 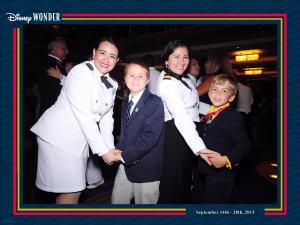 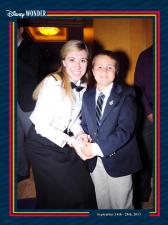 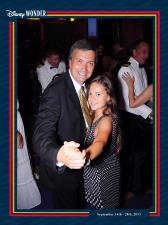 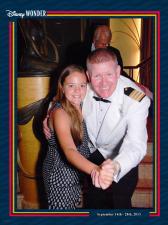 We ended this evening much like the others – the kids running off to join their friends in the kids’ clubs and Lance and I talking a moonlit stroll on Deck 10.  We picked up William by midnight but Alex didn’t make it home until 1:00 a.m.