Since Lance and I had another ballroom dance lesson at 1:00 p.m., he went and grabbed lunch for the four of us and brought it back to the stateroom.  We all ate a quick lunch as we finished getting ready for the day.  We sent the kids off to the clubs and we learned the waltz – including the easier outside turn and trickier inside turn.  Chris and Natalie made it fun to learn!  And am I so glad Lance had a good attitude about the lessons considering he hates to dance.

While the children were involved in their programs, Lance and I took another behind the scenes tour.  This time it was for the Walt Disney Theater.  We loved it and it was amazing to learn how they store all of the scenery, costumes and props for the many, many live theatrical shows.  It was also nice to spend some more time with the cast members who perform in the shows.

We checked on the kids and after ensuring they wanted to stay right where they were, we headed back to the stateroom.  I needed to do some laundry and Lance wanted to work on the boat for the Goofy and Max boat building competition.   I have to brag on my husband for a bit.  He is so very talented with his ideas for the boat.  We have all given suggestions and he has taken most of them and turned them into really amazing concepts!!  I can’t wait to see the finished product.  And I will say that I am very thankful for the Cruise CD we received in our fish extender since it had the boat horn song on it.  Not only will our boat look like the wonder, it will sound like the wonder. 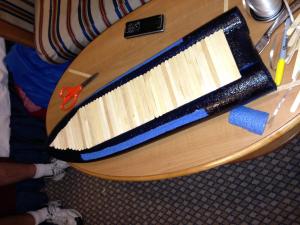 We procured our children and got ready for the Prince and Princess night! The first stop was to take a few pictures in the lobby atrium. We all enjoyed the show “Magic with Dave” as a family before Alex headed down to the Edge for the Brains and Brawn competition. She had strict instructions to join us at Animator’s Palate for dinner by 8:30 p.m. While we waited for dinner, the boys and I spent some time pin trading with the officers.

We arrived at dinner around 8:15 p.m. and I am happy to report Alex slid into her seat right at 8:30 p.m. I am so thankful she was so responsible. We had another lovely dinner! We have gotten to know several people in our dining rotation. One person is a man named Mr. Raymond from Puerto Rico via Miami. He was a former cast member on the Disney Magic and currently works at Walt Disney World Resort and he loves all things Disney. He and his friend Dan have been so very sweet to our kids. We even hung out with them during the Panama Canal Crossing.

After a few more pictures with characters after dinner, Alex headed to the Edge and William came back to change clothes for the Coast to Coast Campout. On the longer voyages, the Wonder offers a night for the kids to stay all night long in Disney’s Oceaneer’s Lab. They sent a cute orange backpack with the invitation in it on one of the first sea days. They have tons of activities, games, food, etc., planned for the kids. We also packed a bag for Alex to drop off in the Edge since she and some friends who aren’t 13 yet can go and join the fun at the campout. When we dropped off William, he had several friends run up excited to see him!

Lance and I headed up to Deck 9 and watched a movie on funnel vision. The air was cool and the wind was strong. It was the perfect night for being out under the stars in the middle of the Caribbean Ocean. As we headed back to the stateroom, we made a final check on the kids at the campout. Both were having a great time! Kid free until 8:30 a.m.!!