Lance woke up early again this day. He busied himself with the sports deck and health club. Around 11:30 a.m. he decided it was time for us sleepyheads to wake up! We couldn’t believe how late we slept. But I am glad we did as we all were much more rested than we had been.

Alex insisted she wasn’t hungry so after she (and William) finished their journal entries from yesterday; she was back off to the Edge. William, Lance and I went to lunch at Triton’s. We all picked burgers from the menu. Sometimes simple is best but had we wanted something more “fancy” we certainly could have chosen it. Our waiter today was Juan from Honduras. He was hilarious and did some fun magic tricks with William.

During the cruise, we have all four had such a great time pin trading. Today we spent some time doing that and also checking out the most recent photos we have had made so far this cruise. While making our way around the ship, the cast members rolled out a master’s chipping golf contest in the lobby. Lance signed up to play and not surprisingly at all, he won the contest! He received a DCL sunglasses case with DCL golf balls and tees. 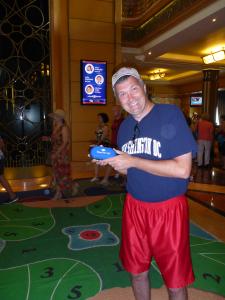 We sent Alex to the Edge with her Algebra homework, the boys went up for the basketball free throwing competition and I went to take part in the Broadway music trivia.

Tonight’s show featured the Broadway performer Grant Norman. We thoroughly enjoyed the show. Grant was formerly the Beast in “Beauty and the Beast” as well as Gaston on Broadway. He also played the Phantom in “Phantom of the Opera.” He took us on a journey of Broadway musicals and even included a sing-along to several songs from Mary Poppins. It was a beautiful show and we were so happy we went! 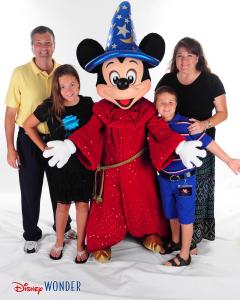 We joined the kids and the ships’ officers for some serious pin trading in the lobby atrium. All of us left very happy with our trading. After the kids took a few more character photos, we headed to Parrot Cay for the Taste of California dinner. 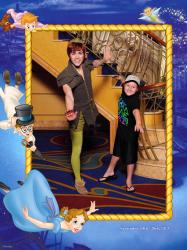 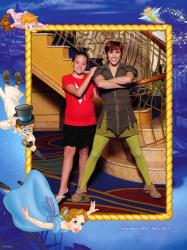 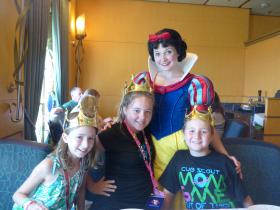 Dinner, as usual, was fabulous. The only dark spot was that Asif wasn’t at dinner. Turns out he sprained his back at work today and needed to rest. Funny how all four of us were sad we didn’t have Asif for the evening. How will we be after another 8 nights with him?! A waiter named Joselyn filled in for him tonight and helped Renato and they promised Asif would return tomorrow. For a change, William was the one who finished dinner quickly and took himself to the Oceaneer’s Lab. We were able to finish dinner with Alex before she excused herself to go to the Edge. This all worked out well as Lance and I were able to go the adult-only Beatles show — well, we made it through the first half before we realized we were both falling asleep.

William was ready for bed when we went to pick him up at 11:00 p.m. but Alex asked for permission to stay out for the PJ Movie time. She rolled in around 1:00 a.m. after the fun times were over in the Edge. While I waited up for her, William and I watched Area 51 and ordered some room service. Chicken fingers and guacamole hit the spot!