Today was a great day at sea! Lance woke up early and made a trip to the health club and rode the bike. He said he needed to work out to make up for all of the food he is eating. I haven’t made it yet but I am taking the stairs just about every time instead of the elevator which means I have walked quite a few stairs since we are on Deck 1.

This was the day we were scheduled for our character breakfast in Parrot Cay. (They do character breakfasts when there are at least 3 days at sea on a cruise.) We enjoyed the time. Mickey, Minnie, Donald, Goofy, Pluto, Chip and Dale made the rounds. During our meal, the waiters all around the room were making fun hats for the guests out of the napkins. Asif was our official hat maker.  The kids got Peter Pan hats, Indian headdresses and flowers. I got Minnie’s bow and Lance got the dreadlocks from Captain Jack Sparrow. Fun, Fun!! Alex went to the Edge immediately following — anyone seeing a pattern here?! William went to the Oceaneer’s Lab. 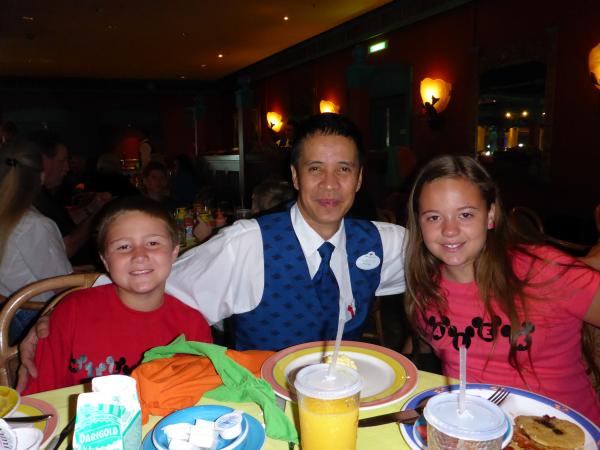 While both kids were occupied, Lance and I went to the Ballroom Dancing lessons with Natalie and Chris. We, along with about 30 other couples, learned how to Foxtrot. It was fun and there were even some pretty hilarious moments with toes being stepped on and bodies being run into.

After our dancing, I decided to take advantage of Vista Spa. First, I had Olga from Ukraine do a shellac manicure and pedicure while I leaned back and watched the ocean. Very relaxing!!  Olga did a great job. I followed this with a Swedish massage. (Each day the spa has specials and this was the special for today.) I had about 30 minutes in between appointments so I was able to take a relaxing rest in the waiting room of the spa. It was very relaxing to rest with my robe on and relaxing music playing. Jonalynn from the Philippines was my massage therapist. She did an amazing job. I walked out of the spa feeling very relaxed and ready for the evening. While I was busy, Lance and William went and played ping pong and foosball. Lance beat William at ping pong and William beat his dad at foosball. Good day for both!

There had been a hurricane in the Acapulco area and we saw the aftermath even miles out to sea. There were huge trails of debris every so often. Full-sized trees — hundreds of them — floated by the ship. We also saw tons of coconuts floating in the ocean. It was very sobering.

Tonight was the night of the Beatles concert in the Mickey Mouse Theatre.  The three of us who went LOVED it! William was shocked that he knew some of their songs. We met back up with Alex for family and character photos before dinner.   This was our night for dining in the Animator’s Palette with the full show. The restaurant started with everything black and white and ended with full color, including the waiter’s clothing. William was asked to be a part of the ending ceremony with Mickey. He was the only child invited to take part in it and LOVED it!!! Magical Memories!!

On the way back from dinner, we stopped off in Shutters. Since we purchased the package, the kids have been serious about taking advantage of all photo opportunities. Alex is now referred to as the Photo Queen by several of the character handlers. They all also seem to know that her favorite character is Iridessa. So not only is she the Energizer bunny she is Chatty Cathy. While picking up our photos we also ran into the cruise director Jimmy.  It turns out his family is on this cruise and William has become good friends with his son Drew and his daughter Mia in the Oceaneer’s Lab.

Once we made sure both kids made it to the kids’ clubs and Lance and I went to the Rowdy Ruckus — a line-dancing party.  Memories of BJ’s, Wranglers and Midnight Rodeo came flooding back. Lance was a trooper and gave it a try. Fun times! I still can’t believe I got him to dance lessons twice in one day!

Shortly after midnight all four of us were back in the stateroom ready for bed. And exhausting but fun-filled day!! No boring moments on a sea day. 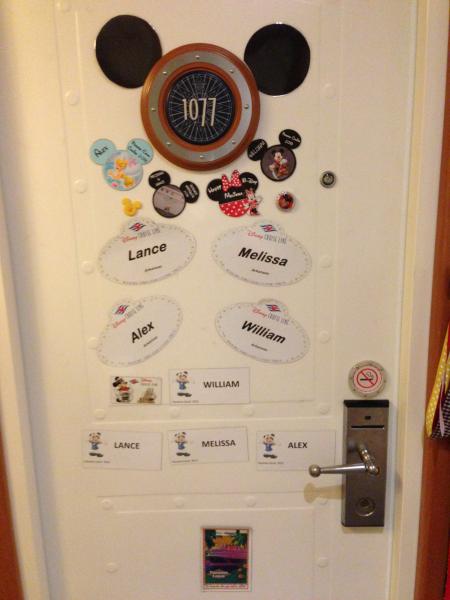