Request A Quote(501) 831-5211
Are you ready to start "PLANNING TO BE SPONTANEOUS" with one of our BIG FUN Disney Experts?
Let's Get Started

Hi, we’re the Fortune Family from Little Rock and we went to Universal Orlando recently, with many thanks to Small World Big Fun and Stone VIPs.  It was lifelong memory-making stuff and I won’t include a lot of the pictures we took because you and your family need to see it for yourselves, but hopefully this will get you thinking about it …

We’re big Harry Potter fans. Not necessarily “dress up like the characters and go to the grocery store” (though maybe closer to that now) but fans – we’ve read the books, we’ve re-read the books. We own the movies. We’ve seen the movies. Every time Freeform does a “Harry Potter Weekend” we don’t get much done around the house. Fans. As someone who grew up on the epics of Star Wars and Indiana Jones, it’s a blast for me to share these experiences with my kids.

I haven’t done all the math but as near as I can tell I was in my 20s and childless when the books and movies came out, so I’m a bit late to the game and I really wish I’d seen all the movies on the big screen (you could make a lot of money re-screening those I think), but it’s a big hoot doing all this with my family now.

For what seems like decades (but he’s 12) my son has seen Universal Orlando Resort™ ads and said “we’re NEVER going to go there” in that special half-whine / half-longing way kids do. And as parents, we try our best to correct the whining, but we always knew we’d do what we could to get there.  Because we wanted to go too.

So, we cashed in the Southwest Airlines Visa points, told Cindy Minor “let’s do it” and surprised the kiddos on Valentine’s Day with a Harry Potter gift box detailing our trip to Universal Orlando for the upcoming long weekend. Plus, the trip was just before my son’s 12th birthday so it fit in nicely with that celebration, it’s not “high season” in the parks and the weather’s great in Orlando, so why not go???

Note: what I should write here is a beautiful description of how surprised the kids were on finding out we were going including embedding the video we shot capturing the surprise. But we woke them up early for school for the “Big Reveal” and to say their sleep-induced state took over the surprise would be an understatement. It isn’t worth watching. But we’ll keep it for when they take their kids someday. The lesson?  14- and 12-year-olds don’t surprise easily. At least not early in the morning.

So, we drove to Memphis (MUCH cheaper and non-stop flights by driving 2 hours to leave and when you’re buying 4 plane tickets that MATTERS) and took off on Saturday (also much cheaper to fly on Saturday). 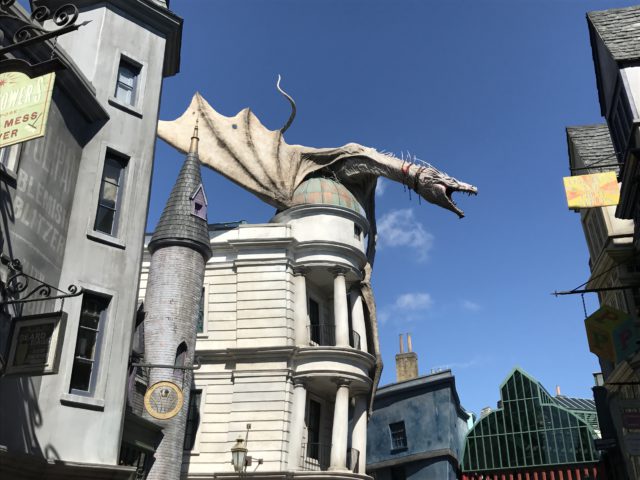 Some things to keep in mind:

Here’s What We Did, if you’d Like a Detailed Itinerary, Just Let Me Know and I’ll Make One up (I can’t remember it all!!)

We Arrived at Universal Orlando as Muggles and Left as Wizards

So, the primary attraction for this trip was the Wizarding World of Harry Potter (WWoHP), which is actually two sets of attractions (Hogsmeade / Hogwarts at Islands of Adventure and Diagon Alley at Universal Studios).  The attractions are connected by the Hogwarts Express, which you MUST ride both ways — not because you have to, but because the ride is absolutely unique in each direction and is oh so cool. And you leave from Platform 9 3/4 at King’s Cross Station — and yes, you get to the platform the same way Harry, Ron and Hermione do it in the books. Trust me.

I think one would get a huge kick out of WWoHP because it is an amazing spectacle just in all that Universal has built whether or not you’ve read the books and/or seen the movies, but it is absolutely unbelievable if you have.  From the amazing detail of what they’ve built in all locations to the “spells” (yes, you’ll be buying your kids — or yourself — a wand, we were partial to Fred Weasley’s and Sirius Black’s wands) to the great treats (Frozen Butterbeer rocks!) all things WWoHP is just such a thrill.

So, it’s just my family?

Well, ok, humor me then.

On a Stone VIP tour, that does not happen. The day flies by and you just wish it could go on for a lot longer.

We did our “Harry Potter Day” with Dinah, a guide from Stone VIPs and it was totally worth it.  Not only do you get through lines faster and have a fantastic journey through the WWoHP with Stone you also get a unique, “inside” look at how the park developed, ties between the park attractions and the movies and books and just the whole Harry Potter experience.

Most importantly, my kids had a blast with Dinah!  She brought an energy and excitement that kept the kids enthralled throughout a 6-hour tour across the parks, peppered with trivia questions and tips / tricks about the parks, the books and the movies.  And let’s be honest — rare is the parent or grandparent who can do that.

I’m not sure I realized just how great it was until we went back through WWoHP without a Stone Guide and saw just how much we missed without being guided by such a great group. Once you’ve returned to “commoner” status and you longingly stare at the other side of the barrier where folks breeze through and get all the great insider tips — you realize what a great, unique and valuable experience it is to have a personal guide through WWoHP — it really makes the whole thing amazingly memorable.

Wizarding World of Harry Potter is great. With Stone VIPs, it is unbelievably great.

Tip: Tower 3 rooms are closest to the water taxi, so think about requesting a room there

Things We Didn’t Do Because We’re Not Really Roller Coaster People, but I’m sure they’re quite fun

It’s Not All Harry Potter

There are many, many other things to do in these parks that are not Harry Potter related. My kids are 14 and 12 so we didn’t do as much of the smaller kid attractions as we would have a few years ago, though we did the “roller coaster” in Seussland just for fun (and a pretty cool view of the park from above). 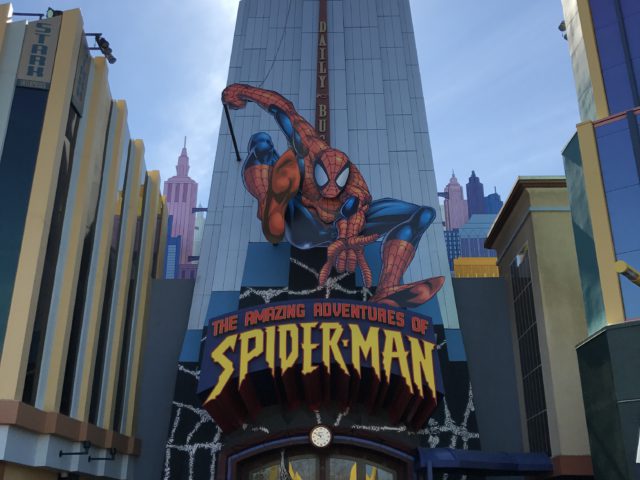 Universal seems to really have many of the “simulator” rides that are really cool in the thrills and chills they offer.  We were partial to the Spider-Man ride (rode multiple times), the Simpsons ride is a ton of fun (and there’s a very similar one at Universal in Los Angeles) and Men of Black gives you a chance to shoot aliens (you get spun REAL fast in that one).  The Minions ride is also great fun in that area.

If you’re into The Simpsons that section of Universal Studios is fun with lots of games, The Simpsons Ride, lots of places to eat.

Oh Yeah, We Ate Great Too!

Toothsome Chocolate Emporium — we went there as soon as we got to City Walk on Saturday night, we put our name on the list for a 2 hour and 20-minute wait and then went shopping and walked around until then — but, it was worth it. Such a cool place, fantastic food (it’s way more than Chocolate), HUGE portions (see photo, that was 1 person’s dessert!).  And, you order dessert when you sit down as it takes 30-45 minutes to make dessert — what’s not to love about that??!?!??

Other great eats (by the way, sometimes “great” means highly functional for a family on the move):

I Know this is Small World Big Fun’s Blog, but Still …

I don’t work on my own car.

I fix very little around my house (we’re all safer for that).

And I do not know the best way to plan a family “destination” vacation like this, nor do I want to learn. There are experts for this, and THE BEST are at Small World Big Fun. While I know so much of their business involves the “other” really fun places to go in Orlando (and we’ve used them for those trips 3 times so far) they really know Universal Studios well,  and their relationship and the opportunities with Stone VIPs is awesome.

With Cindy and her team, you can pretty much just show up at time to get on the plane and go — the planning, the ideas for where to go and what to do, all that stuff that can make trips like these stressful — it’s taken care of.

And they’re NO FEE, so you don’t pay them, your trip costs the same whether or not you use them, so why wouldn’t you and relieve yourselves of the hassle?? 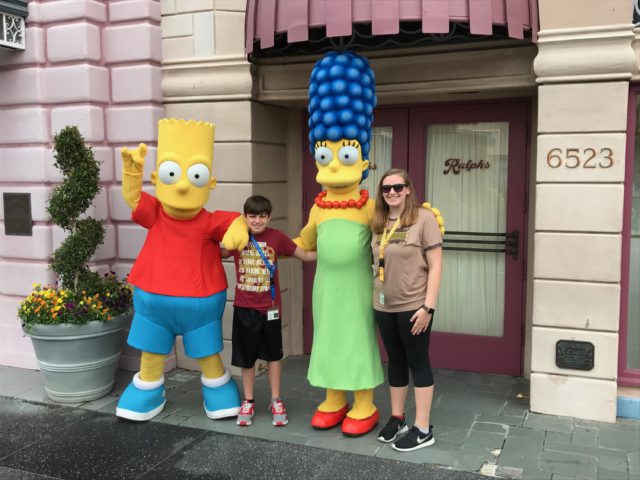 Are you ready to start “PLANNING TO BE SPONTANEOUS” with one of our BIG FUN Disney Experts?